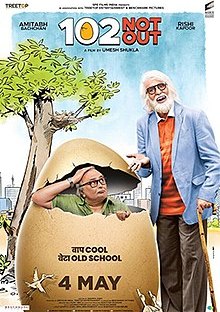 Amitabh Bachchan and Rishi Kapoor. Legends in their own right. They have shared screen space together in many big movies. ‘Kabhi Kabhie’, ‘Amar Akbar Anthony’ are some of them off the top of my head. Now,  they are coming back together in the movie ‘102 Not Out’ after 26 years. It is bound to grab eye-balls.

The plot revolves around an interesting middle-income Gujarati family consisting of a centenarian father, his septuagenarian son and their man friday. The centenarian father Dattatreya Vakharia ( Amitabh Bachchan) wants to break the world record of being the oldest living man in the world who apparently happens to be a Chinese man. He happens to learn that to achieve his goal he needs to a exuberant and happy atmosphere around him.

But he considers his son Babulal Vakharia (Rishi Kapoor) to be a “pakela thaleka aadmi” that is other words a boring person. Thus he decides to send his to an old age home to achieve his goal. It comes as a shock to Babulal and is completely against it. To work out a compromise the father and son duo come to an agreement so that Babulal can stay at home.

He is to complete a given set of tasks in a period of six months. This sets in motion a series of events which unravel the various equations he shares with the different members of his family. The relationship with his dead wife, his father, their man friday and his estranged son. But unknown to him his father doesn’t want his estranged son to reconnect with his father.

Amitabh Bachchan as the centenarian Dattatreya Vakharia is the soul of the film. He with his happy-go-lucky nature and unique philosophy to life brings the film to life. He may be old but is still a child at heart. While Rishi Kapoor as Babulal has become the stereotype of an old man fretting over his health who has shied away from life. Dhiru ( Jimit Trivedi) perfectly plays his role as their man friday though his original job is that of an assistant at a local medical store.

In essence, the movie is a story on life and its lessons. It basically reaffirms you need to enjoy the smaller pleasures of life to lead a happy life. The movie has been shot beautifully and the locations have been selected well. Best part of the movie is that the director sticks to the screenplay and keeps the story tight.

An avid political enthusiast who likes to comment on governance, policy and current affairs. I enjoy watching and playing cricket. And tend to get lost watching live matches on television. Apart from my love for cricket, I enjoy reading books and like to travel with an occasional admiration for photography. Currently pursuing a degree in mass communication, I am exploring new facets of thought and ideology while expanding my skills. View all posts by iamvhardik